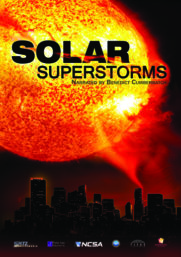 The reviews are in, and they are glowing for Solar Superstorms, the new fulldome show from Spitz Creative Media. The award-winning producers of shows such as Dynamic Earth and Supervolcanoes debuted the spectacular, effects-filled science[...]

Spitz Creative Media and Thomas Lucas Productions to collaborate with AVL on three fulldome shows The National Science Foundation has awarded $1.5 million to a project led by the National Center for Supercomputing Applications (NCSA)[...]